A look into the most popular Google search trends in 2018.

Think about what your Google history says about you.

It shows your likes, interests, recent behavior, location and more.

It's a window into your mind. As close to reading your thoughts as is possible in this day and age.

Besides being a useful source for PPC and SEO optimization, the list offers a fascinating window into our society on a collective level, what we care about and value as a whole.

And the results are eye-opening.

Celebrities, rappers, musicians, movies and TV shows took the top spots this year. Social, environmental and political issues (though not all) took a backseat.

Google doesn’t go into much detail about how it makes the list, only saying that they are "based on search terms that had the highest spike this year as compared to the previous year."

But at any rate it is a fasincating look into online search behavior.

You can also filter by country, which can be an extremely handy tool in understanding foreign markets and cultures.

So what were the most popular search terms in Google in 2018? Drumroll please….

It's a pretty random top 10 to be honest. At least at first glance. But let's make sense of the numbers.

The World Cup obviously took the top spot. Occurring every four years, it is the only sporting tournament in history where literally the entire world tunes in to watch.

The other entries get a little depressing, since they are dominated by the early deaths of musicians and thought leaders.

In 2018 we saw Swedish house musician Avicii pass away in April, along with American rappers Mac Miller and XXXTentacion in September and June. We also saw world-renowned physicist Stephen Hawking pass away in March, American comic book writer Stan Lee in November and American fashion designer Kate Spade in June.

These losses are always a shock to society, and its reflected in our search behavior. Deaths of famous individuals continuously end up as top search results in Google.

Top Google search trends in the United States in 2018

If we look at just the United States, we can get more information on specific categories and search topics.

The top ten Google search trends in just the United States in 2018 were:

Like every year, Americans were worried whether hurricane (insert name here) would affect their homes in 2018, and this showed up in search results.

The lottery is also a consistent term Americans search for, with mega millions results securing the number 7 spot.

Election results sneaked in at number 10 this year, probably a reflection of the increased attention mid-term elections in the United States received as they were largely seen as being a referendum on the Trump presidency.

The increased importance of elections is reflected in search traffic for the term 'how to' in 2018.

The searches 'how to vote' and 'how to register to vote' ended up as the number one and number two results in the 'how to' search category.

That's pretty sophisticated compared to previous years, where the top search terms were 'how to play pokemon go?' in 2016 and 'how to make slime?' in 2017.

The cryptocurrency craze seems to still be going strong in the United States, with the search terms 'how to buy ripple and bitcoin' both stealing spots in the top ten.

Americans also seemed pretty rattled by the update Snapchat made to its interface early in the year, which saw many big stars dump the platform and criticize it after.

Here is the full list of 'how to' searches:

Equally revealing are the top ten 'what is' searches in the United States:

With 'what is' searches, political questions predominate, with Americans probing into more complicated topics like 'what is DACA', 'what is a government shut down', and the highly subjective question 'what is a nationalist?'

Racketeering is an odd term to be at number two, but is probably a reflection of the increased media coverage around Donald Trump and the investigations into his presidential campaign in 2016 where the term is thrown around often.

In terms of news events, besides the World Cup, Americans searched for hurricanes, who won the lottery, elections, the Florida shooting and how many medals the US got in the Olympics. Also government shutdown clinched the tenth spot, an event that has become something like an annual phenomenon in US politics.

Notoriously famous for not knowing their geography, the 'where is' Google search term documents Americans' attempts to improve their poor geographic knowledge.

Villanova University took the top spot, as the victory of the Villanova Wildcats in the NCAA tournament in March apparently had a lot of Americans scratching their heads trying to figure out where exactly 'Villanova' was located.

Croatia suffered the same fate in the World Cup, with Americans obviously curious to see who exactly France was playing against in the final.

The Winter Olympics in South Korea got a lot of Americans interested in where Pyeonchang was located.

And Amazon's flirtations across North America in 2018 as to where it would open its second headquarters had a lot of people searching where their initial headquarters was based.

It was all about keto in 2018 when it came to food. Not only did it clinch the top spot in most popular diets in 2018, keto recipes took up five of the top ten results for food searches, with Americans searching for keto pancakes, keto chili, keto cheesecake, keto brownies and keto cookies.

Goodbye Atkins and Paleo, there is a new fad diet in town.

When it comes to fashion, it looks like the 1980s are back, with the search terms '1980s fashion' and 'Grunge style' both securing the top two spots in the fashion category.

Other interesting Google searches in 2018

How does 2018 compare with previous years? 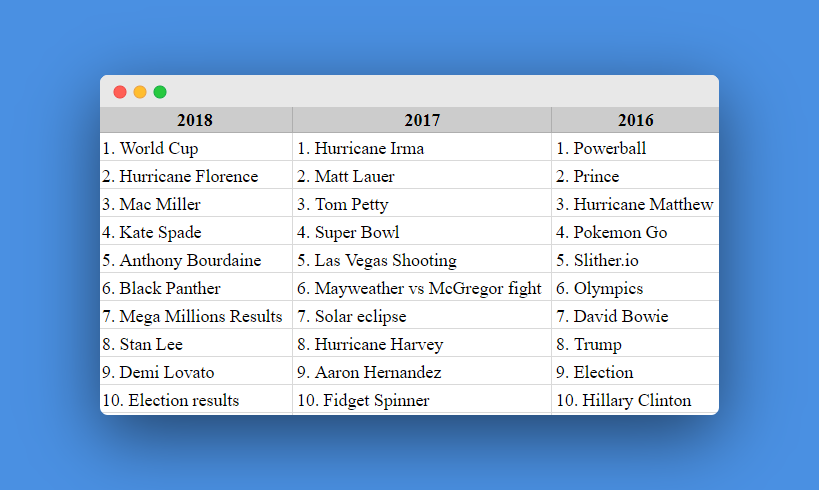 We can see some general themes in search behavior among Americans, with searches for hurricanes, the lottery and celebrity losses making the top ten lists each year. Political events like elections, sports tournaments and the release of new movies, video games and tv shows then fill in the rest of the spots.

Overall, the lists Google puts out are a fascinating look into American society.

You can play around with the lists and filter by category, region and year here.

Google even released a video summing up all the results.

It'll be interesting to see what 2019 has in store.

Wasting a bunch of time creating and managing PPC campaigns? Check out our smart advertising solutions to see how they can help you save time on your PPC campaigns.