Is the mobile app era coming to an end?

The mobile analytics firm App Annie released an interesting report last week that revealed the growth of mobile apps in 2018.

Three figures in the report stood out:

When you read the numbers, the trend is clear.

More apps are being downloaded. People are spending more money on them and also more time.

The report also predicted growth would continue in 2019, forecasting that app store consumer spend would total $120 billion this year.

Taken together, these facts confirm the trend of a ‘mobile app revolution’ identified several years ago when the big tech giants first began launching their own apps for their services.

The idea behind the app revolution is that one day every legal entity will have an app for their product or service.

But while the report indicates a healthy space for mobile apps, there are also signs that mobile app growth could be hitting its peak and be on the descent.

We'll take a look at both arguments in this article. But first, here are the macro trends regarding mobile app growth in 2018 identified in App Annie's report:

In fact, mobile app downloads grew at much faster rates in emerging markets like China or Indonesia in 2018 than established western markets like the United States or in Europe.

But, while downloads were highest in emerging markets, actual consumer spending and user engagement was growing at higher rates in mature markets.

When it comes to mobile app purchases, spending topped $100 billion for the first time in 2018, with China accounting for 40%.

People are also spending 50% more time on mobile apps, an average of 3 hours a day worldwide, and the number is even higher in the developing world at nearly 4 hours per day.

Messaging and social media apps accounted for 50% of the time spent on apps, with video players like YouTube following at 15%.

Interestingly, the report says the average consumer in the United States, South Korea, Japan and Australia has over 100 apps on their smartphone, but they most likely only use a handful of those on a regular basis.

Young people between the ages of 16-24 engage with mobile apps 30% more than every other age group according to the report. Known as Generation Z, individuals in this age group are simply much more comfortable using their phones in all aspects of their lives, unlike older generations that are more hesitant. 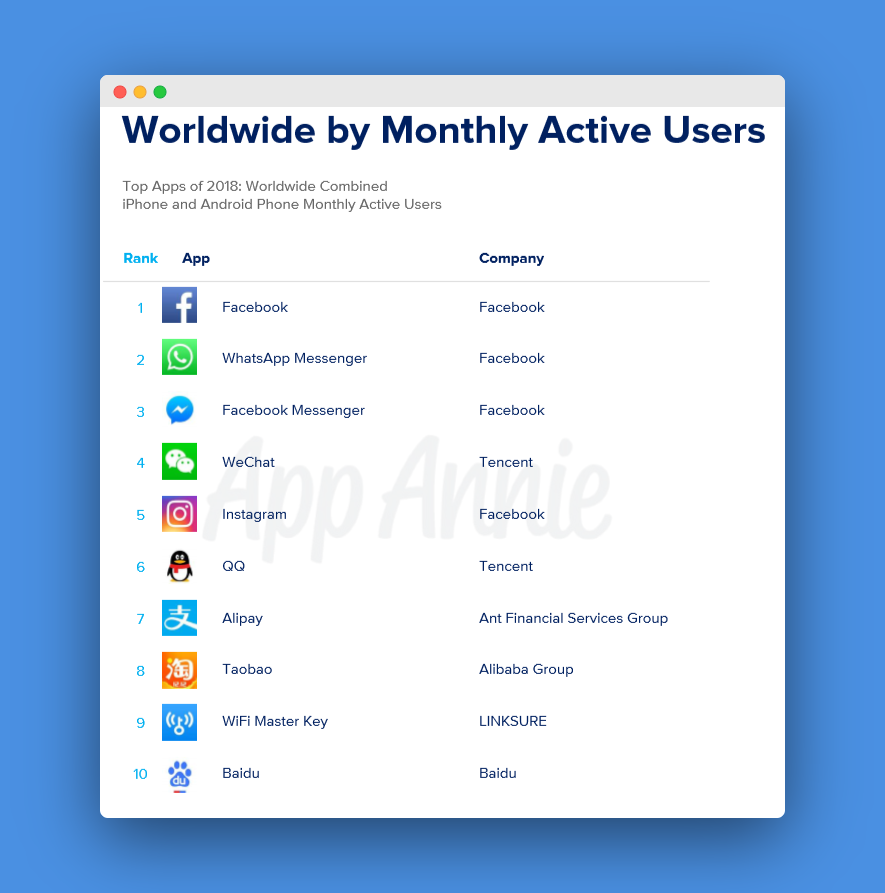 By downloads the picture changes slightly, but not much. Facebook still dominates the top five, but we have other non-Chinese apps clinch spots in the top 10, including Snapchat, Netflix and Spotify. 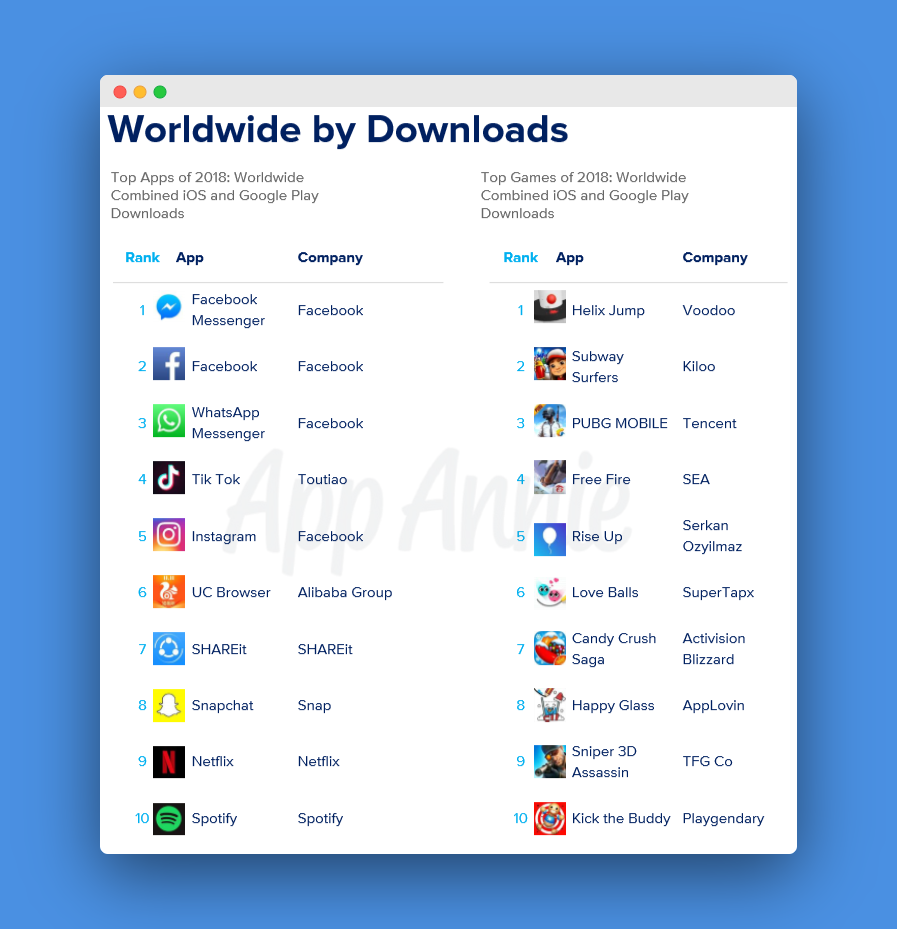 Consumer spending is where the picture changes more drastically. Netflix and Tinder are the two apps around the world that people are most willing to spend money on. Netflix and chill anyone? Perhaps there is a connection. 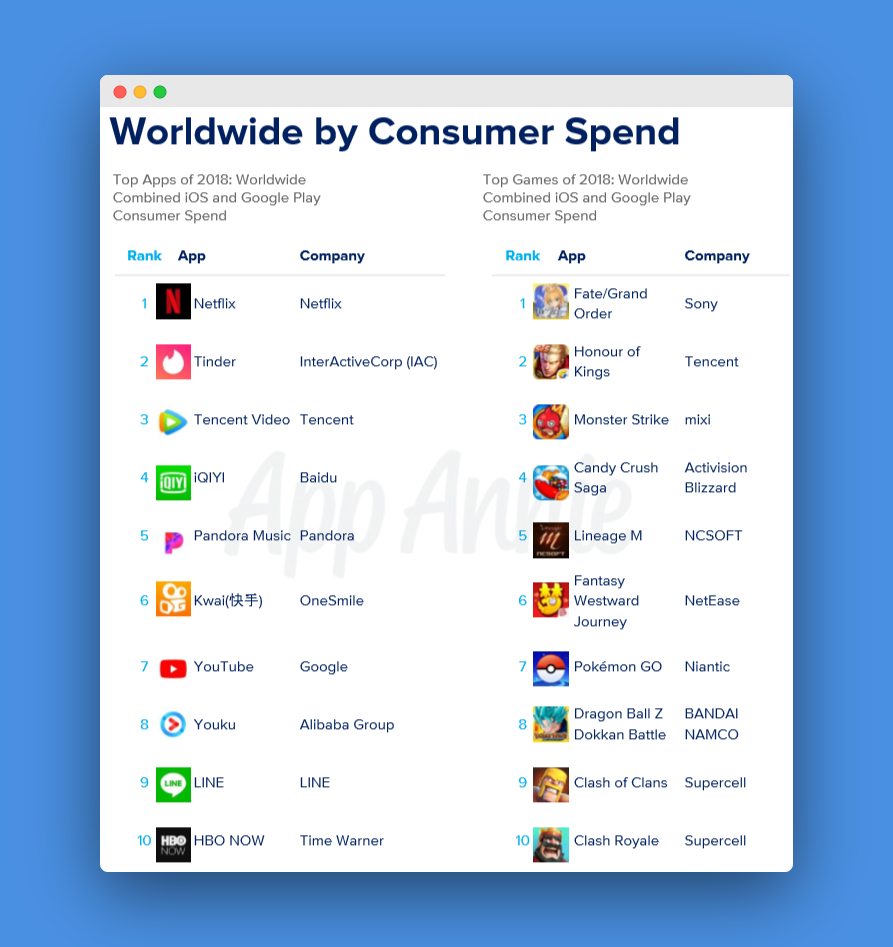 These are the top mobile apps in just the United States. 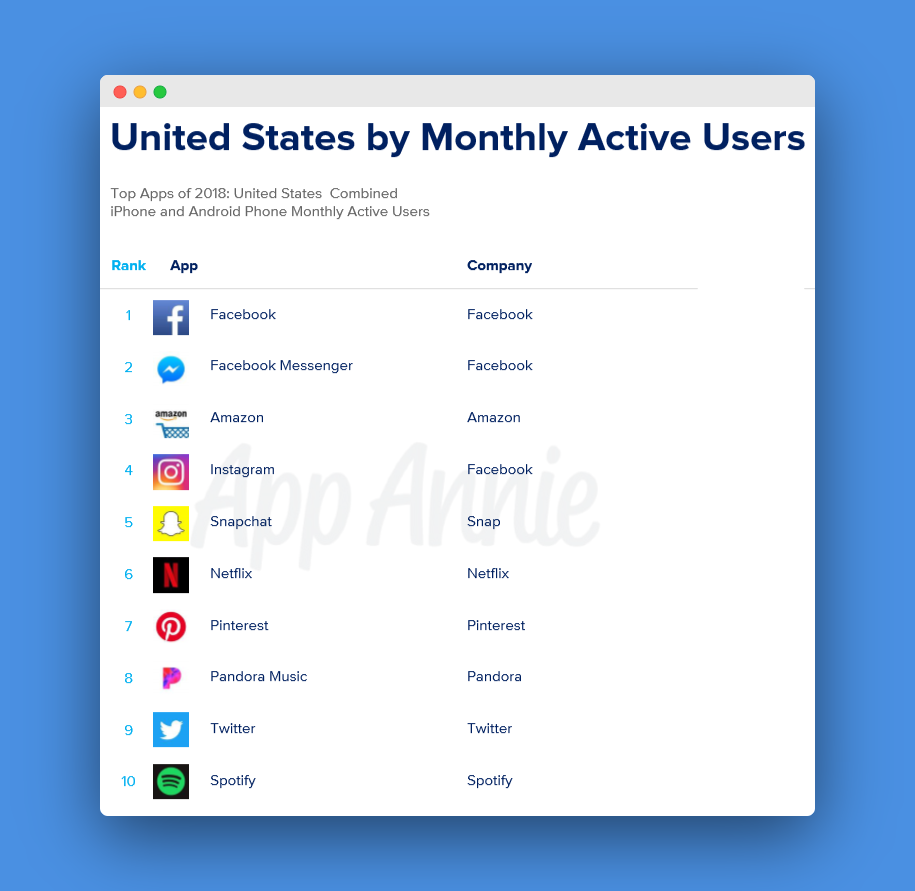 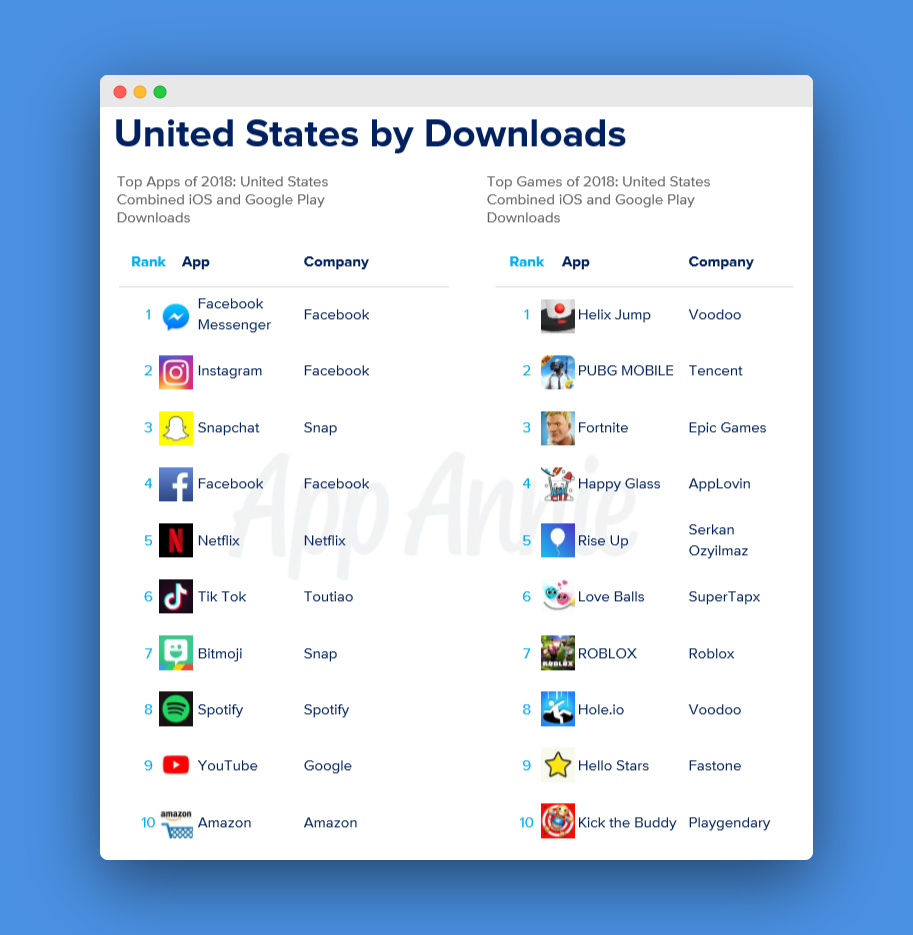 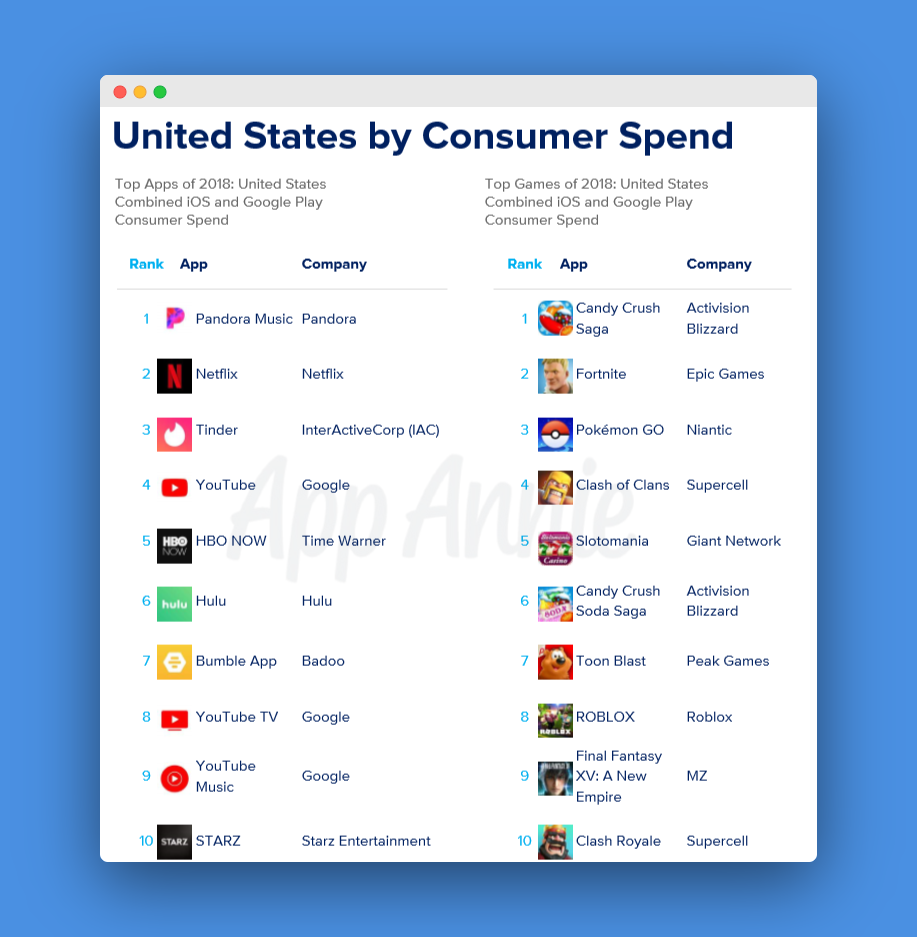 Here are the trends that App Annie gave for different categories of mobile apps.

• Games accounted for 74% of consumer spend in app stores in 2018.
• Mobile gaming was the fastest growing sector of the gaming market, overtaking PC games and gaming consoles.
• China, the United States and Japan account for 75% of consumer spend on gaming mobile apps.

• Mobile shopping sessions were up 65% globally in the past two years.
• November 2018 was the biggest mobile shopping month in history.
• Mobile to make up 75% of total e-commerce transactions by 2021.
• Digital-only retailers had 3 times more sessions on their apps compared to bricks-and-clicks retailers like Nike, Target or Walmart.
• Peer-to-peer marketplaces like eBay were second most popular kind of retail app downloaded in 2018.
• Flash sales are becoming more popular. Alibaba’s Singles Day brought about $30.8 billion in spending, the largest single e-commerce day ever.
• 130 million hours were spent on mobile apps in the weeks revolving Black Friday and Cyber Monday.
• $5 billion was spent on mobile on Thanksgiving, Black Friday and Cyber Monday this year.

• Consumer purchases of food and drinks via apps up 130% compared to 2016. Huge growth in both mature markets like France (325%) and emerging markets like India (300%).
• Uber Eats and Zomato were the top two food delivery apps in 2018 by downloads.
• Food delivery app growth totaled 900% in India, 255% in Canada and 175% in the United States from 2016.
• Restaurants and fast food chains using mobile apps mainly for loyalty programs.

• Global downloads of finance apps totaled 3.4 billion in 2018, up 75% from 2016.
• The average user checks their bank account mobile app on a daily basis.
• Growing popularity of banking apps and Fintech shows users increasingly willing to trust apps with sensitive information.

• Time spent on the top 5 video streaming apps up 140% in 2018 compared to 2016.
• YouTube is the most popular video streaming service in every country except China.
• 9 out of every 10 minutes of video streaming on apps is on YouTube.
• Amazon’s Twitch growing very fast, a reflection of how popular gaming has become.
• Netflix was the top app by consumer spending in nearly every country in 2018.

• Over 685 billion hours were spent globally in social media apps in 2018, up 35% compared to 2016.
• WhatsApp Messenger was the most popular messaging app in 2018 measured by average monthly sessions per user. WhatsApp overtook Facebook by monthly active users in September 2018.
• Instragram had strongest user growth among social media and messaging apps at 35% from January 2017 to December 2018.

• Mobile sessions in travel and navigation apps grew 50% in 2018 compared to 2016. These include apps such as Airbnb, Google Maps or TripAdvisor.
• Micro-mobility apps such as bike-sharing and scooter-sharing apps had explosive growth in 2018. Car sharing apps have also seen huge growth.
• Airline app downloads increased 55% from 2016 to 2018.

• Dating apps are becoming the de-facto way people meet these days. Tinder remains the number one app, but a host of other competitors have come up in the past two years, such as Badoo and Bumble, where only women are allowed to send the first message.
• Tinder is second only to Netflix as the app with the most consumer spending in 2018.

• Health, fitness and nutrition apps have grown threefold since 2016, such as MyFitnessPal. Sleep apps that track the quality of people's sleep, meditation apps and yoga apps are also growing in popularity.
• Downloads of medical apps grew 35% worldwide.

• 65% of iOS App Store downloads come from organic search in 2018.
• The most popular form of App Store Optimization (ASO) were changes to app description at 46%.
• Paid ads drove 15% more US downloads of games in 2018 compared to 2017.
• Total downloads for top apps from paid ads grew 10% year-on-year in the United States.

So those are the figures laid out in the report. They indicate a healthy economy for mobile apps.

But there are sceptics out there that say mobile app growth could be slowing.

In a post that went viral on medium a few months back, Tech writer Lance Ng argued that the mobile app revolution would soon come to an end.

He began his article with a bold claim:

“In the next three to seven years, I expect most mobile apps to disappear. With them, we’ll witness the loss of billions in venture capital that we’ve poured into the mobile startup sector. It will all be burned to ashes, with nothing left but stray lines of code."

He backed that up with some compelling arguments.

So many apps, so little time

First, there is simply a limit to how many apps people can realistically use on their phones. While the average user may have 100 apps downloaded on their phones, they most likely only really ever use a handful of them on a regular basis.

Once you get past the 100 mark, the benefits of mobile apps become obsolete. Putting aside technical issues such as apps taking up too much storage and slowing down phones, people simply don't have enough time in the day to pay attention to more than a handful of apps.

The vision for the mobile app era was that every company would have its own app for its product or service. The branded app would increase customer loyalty to your business.

The problem is that people's attention is finite. People will probably only ever use a few key apps.

Maintaining apps is expensive, and increasingly not worth it

Second, apps are expensive for businesses to maintain.

With every iOS update, a handful of apps stop working and face bugs. Apps need to constantly be updated and this requires an expensive team of developers to make sure the app always runs smoothly.

Companies are increasingly looking at the resources needed to create an app and deciding to put it aside and direct their efforts elsewhere.

These two facts suggest that rather than more growth, the industry is headed toward consolidation.

Smaller apps will no longer be profitable to maintain and operate. Instead they will be gobbled up by bigger players as an app ecosystem begins to take shape around the world, something that is already taking place in China with WeChat.

Watch this report by the New York Times to see where we might be headed.

Instead of companies creating their own app for their services, they will use other apps created by other brands.

“A good example is how restaurants and cafes are integrating into food delivery apps instead of maintaining their own online order and delivery systems. In turn, these food delivery apps are consolidating with mobile wallet or ride-share apps to provide synergy and convenience to users," Ng writes.

Starbucks plans to do just that when it launches a delivery service in the United States in 2019. Rather than use its own app, it is partnering with Uber Eats to deliver its food and coffee to customers.

As Ng puts it: “The truth is, unless you are a major retailer or content publisher that needs to sell or deliver to customers frequently, all you really need is a mobile-friendly website. If information is all people want, they’re going to Google it in a browser.”

So that's the argument against continued mobile growth and in favor of the mobile app revolution coming to an end.

It's important to keep both in mind.

There are undoubtedly many benefits to having your own branded app. They include:

But at the same time, it's worth considering how feasible it will be in the future for every company to create its own app. It's possible that companies will opt for integrating with other apps rather than developing their own.

When the mobile app revolution began, the phrase 'there's an app for that' was popularized.

But will there still be 'an app for that' in three, five or ten years from now? Perhaps not. We'll have to wait to find out.

Spending too much time on PPC marketing your app? Check out how our smart advertising solutions can save you tons of hours managing PPC campaigns.