A look at the problems Google Ad Scripts could cause your campaigns.

Google Ads scripts can be a godsend when it comes to saving time and improving campaign performance.

They help automate mundane, repetitive tasks best left for computers while freeing up time for the average PPC marketer to think of bigger picture issues like strategy.

But at the same time, relying too much on Google Ads scripts could hurt your campaign in ways that might not be totally noticeable at first.

So what kind of problems can Google Ads scripts cause?

Let's first break down what exactly Google Ads scripts are.

What are Google Ads scripts?

Google Ads scripts are snippets of code designed to optimize your campaigns. 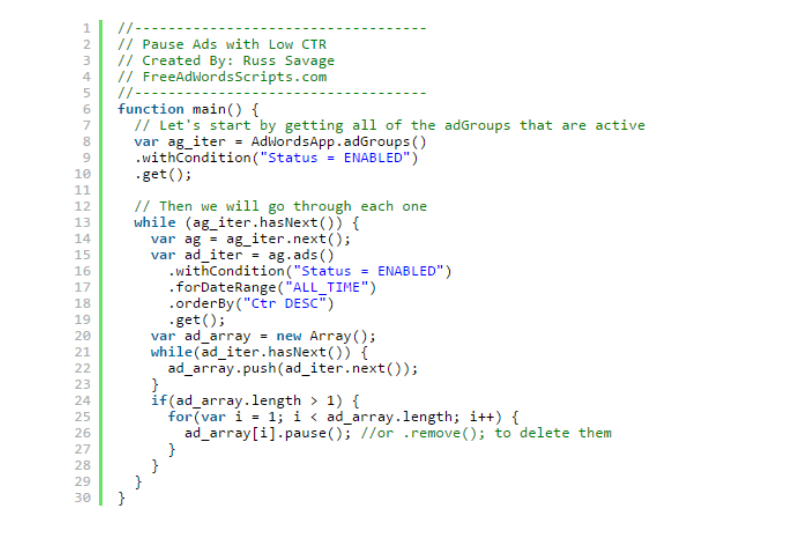 Without any coding knowledge you very well may be.

And that is the problem with Google Ads scripts, as we'll get into later. They can be complicated.

You can find Google Ads scripts that help you with literally hundreds of various PPC tasks, from bid modifiers to seasonality, to Google Display Network and Shopping Campaigns to simple alerts and help with reporting.

What are the benefits of Google Ads Scripts?

The biggest benefit to Google Ads scripts is that they automate those mindnumbing tasks that are best left to machines.

This in turn frees up PPC marketers to focus on more important aspects of their job, like keyword research.

To create a healthy account, a PPC marketer needs to do a ton of little things, such as:

All of this takes time, is repetive and can burn you out.

Google Ads scripts take those jobs that take hours and trim them down to minutes. Not bad.

When making changes to your campaign manually, it is really easy for a person to make a mistake, such as a misspelling, choosing the wrong match type or setting the incorrect daily ad budget.

Without paying close attention, PPC marketers can easily end up multiplying this mistake throughout the whole campaign without ever noticing.

After all, PPC marketers are humans too, and part of what comes with being human is making mistakes.

Google Ads scripts help PPC marketers avoid these mistakes by computerizing PPC processes. So unless there is something wrong with the script itself, you can sleep soundly at night knowing your campaigns are performing as they should.

There's no doubt about it, the right Google Ads scripts can significantly help your PPC campaigns.

But that's where we run into problems.

Because, all too often, the Google Ads scripts that are out there, especially the free ones, may not be the 'right' ones for your campaign.

Here are some problems that can arise when implementing Google Ads scripts.

1. Google Ads scripts are a pain to set up

Without any programming knowledge, Google Ad Scripts can be intimidating, to say the least.

And even if you do implement the script correctly, often times scripts require extensive testing to see if they are working as intended.

Most PPC marketers sift through Reddit forums to try to pick the already built-up free versions that can easily be integrated into their campaigns. But this leads to other problems.

2. Google Ads Scripts Can Be Of Questionable Quality

The functionality of Google Ads scripts is often limited, especially when it comes to free scripts.

Moreover, scripts are often created once by a developer and forgotten about, with the code not maintained and updated.

With Google updating its ad platform several times throughout the year, scripts very often go out of date and do not comply with the company's latest ad policies.

As a result, free scripts can often be outdated and useless.

3. Google Ads Scripts can mess up your campaign

A Google Ad Script can be outdated, or it can be incorrectly configured. In either case, your campaign will be the victim.

Executing a script without reading the code beforehand can invite disaster.

But without proper coding knowledge, it can be hard to determine whether everything is okay with a script or not.

To what extent do you trust the script? How do you know it will do only what it says and not something else?

In the best case, you spend time fixing what the script changed. A few hours lost.

In the worst case they permanently damage your campaign.

4. Writing your own Google Ads scripts is expensive

The above-mentioned problems lead many PPC marketers to write their own scripts.

For marketers that know how javascript works and a basic knowledge of coding, this can be a simple endeavor.

But for the vast majority of PPC marketers, this requires outsourcing writing the program to a freelance developer.

The problem though, is that many developers have limited knowledge of how PPC works, and this can result in a long drawn out process to produce the exact Google Ads script you need.

5. Your Google Ad Script could stop working in the future.

Even if you do hire a programmer to create your own Google Ad Script, your script could be rendered worthless in the future because the code is not maintained.

Google is constantly updating its Google Ads platform, and each update carries the threat of destroying any script you created.

This means re-contacting the developer who made your script and having him update it, or finding a new developer if you've lost contact with the old one.

To avoid these headaches, many PPC marketers choose to use third-party software services and pay a monthly fee for functions that a Google Ad script offers. And although the monthly fee can vary between $50 and $500, the benefit is that these companies often have a team of developers working behind scenes to constantly update the and maintain script code.

Also, good third-party software will have a support team behind the product that can be contacted in case anything goes wrong when connecting your Google Ads campaigns.

In any case, automating the mundane, repetitive tasks that take up hours of work is highly recommended. These tasks are important, but they should not be what a PPC marketer should be spending the majority of his day on. Leave that to the machines and free up your day to tackle more rewarding challenges.

Spending too much time on your Google Ads? We automized the most repetitive tasks in our Google Ads Editor alternative to give PPC managers a smoother, faster and more effective experience. Try it out.